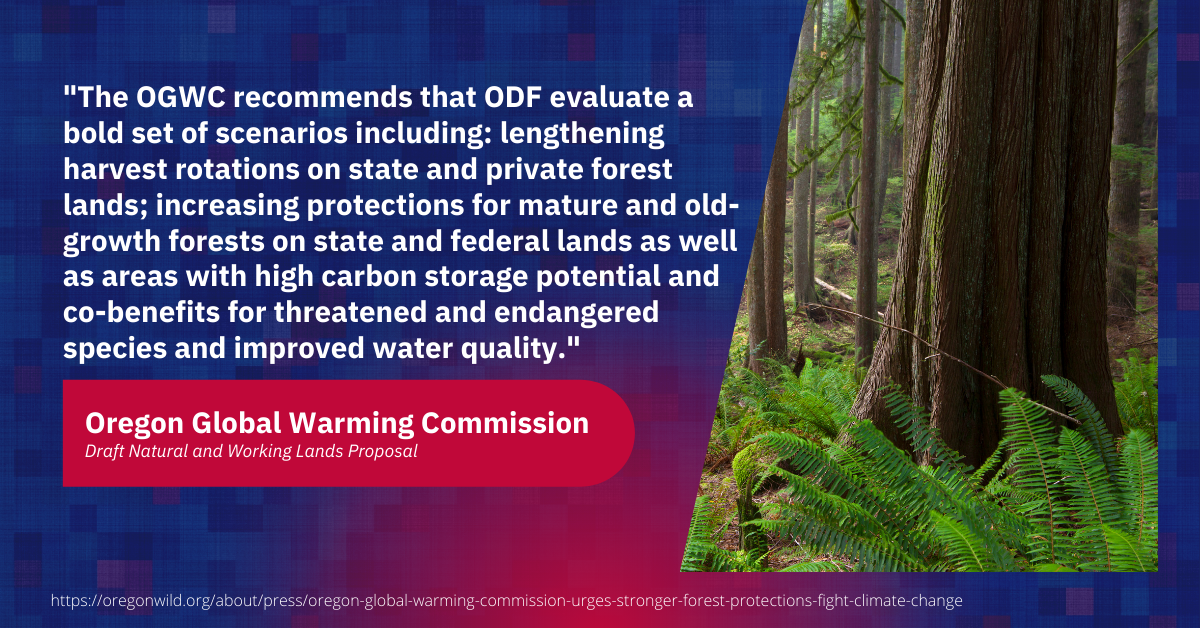 Conservationists are celebrating a new report from the Oregon Global Warming Commission (OGWC) that outlines forest conservation policies as a tool to mitigate climate change. In its draft Draft Natural and Working Lands Proposal released this week, the Commission recommended the state’s Department of Forestry (ODF) examine new policies that would conserve forests on state, private, and federal lands in order to capture and store carbon. The report considers that climate-smart forest management and protections across the state would also provide additional benefits for endangered species and drinking water.

The OGWC recommends that ODF evaluate a bold set of scenarios including: lengthening harvest rotations on state and private forest lands; increasing protections for mature and old-growth forests on state and federal lands as well as areas with high carbon storage potential and co-benefits for threatened and endangered species and improved water quality.

“Climate change scientists and conservationists have been ringing the bell on the potential of Pacific Northwest forests for a long time,” said Lauren Anderson, Oregon Wild’s Forest Climate Policy Coordinator. “The single most effective action Oregon can take to combat climate change is to change our forest policies.”

The recommendation comes quickly after the Biden administration’s proposal for new protections in the Tongass National Forest that would curb old-growth logging, acknowledging the importance of forests for capturing and storing carbon.

A previous report from the OGWC highlighted the fact that the logging industry is the state’s single largest carbon emitter, releasing more emissions than the transportation sector, and far more than fire. Oregon Wild released a 2018 report Forest Defense is Climate Defense that compiled the efforts of the OGWC and climate scientists to propose climate-smart forest policies for Oregon.

“Oregon is falling short of its climate goals, and one of the big reasons for that is the outsized political influence of the logging industry. They want to maintain a climate-killing status-quo,” said Steve Pedery, Oregon Wild’s Conservation Director. “If these recommendations are enacted, it will be a huge step forward for Oregon forest and climate policy. I’m sure there will be a lot of angry phone calls and campaign checks being cut in the coming months from logging interest groups to make sure that doesn’t happen.”

An investigation by the Oregonian/OregonLive illustrated how Oregon logging interests spend more on campaign contributions in Oregon than any other state, which has distorted Oregon tax and environmental policy for decades.