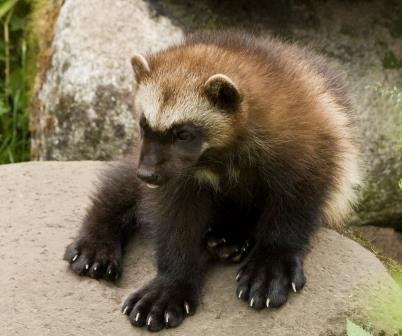 The wolverine is the largest terrestrial member of the weasel family. However, due to its distinct build it is often said to resemble a small bear rather than weasel.

Wolverines are generally the size of a medium-sized dog, between 30 to 55 pounds, with males up to 30 percent larger than females. A stocky animal, wolverines are strong for their size, apparently even fighting bears over food. They have thick, dark coats resistant to frost due to their natural oils, and some have a distinct silver face mask and stripes running from their shoulders to their rump along their sides. Sadly, their distinct, hearty coat has long made wolverines a popular target for trappers.

Wolverines are solitary animals. Males often have a home range spanning nearly 240 square miles. Females have smaller ranges, and there are usually several females within a male's range. Males can travel up to 15 miles a day in search of food and usually try to avoid overlapping with other males' ranges. While the wolverine is omnivorous, they prefer to eat medium-sized rodents or carrion left by wolves and bears.

Known for their ferocity, wolverines have been known to fight with bears and even attack moose stuck in the snow, but young and inexperienced wolverines can sometimes be threatened by wolves, cougars, bears, and eagles.

In Oregon, the best potential wolverine habitat exists along the eastern slopes of the Cascade Range and in the northeastern corner of the state.

Wolverines were believed to have been fully killed and gone from Oregon by 1935, but occasional sightings have been reported over the decades, and at least four have been trapped or found dead over the years. Most recently, in 2011, wolverine tracks were confirmed in Wallowa County. Further research confirmed the presence of three individual wolverines, one of which is suspected to be a "full-time resident" of Oregon.

Why Do They Need Our Help?

Wolverines are rare in Oregon and much of the United States, with their highest densities found in Canada. The wolverine has been considered threatened in Oregon since 1975 and became a candidate for federal protection in 2010. Wolverines ceased to be considered a game animal in Oregon in 1973, resulting in lower human-related mortality, but they are still very susceptible to the threats of habitat loss.

Wolverines prefer open forests and alpine areas and tend to avoid clearcut areas and the young, dense forests that grow up after that. In addition, wolverines require a habitat that provides cold, snowy conditions for much of the year because they rely on deep snow for denning as well as food storage. As a result, climate change is expected to substantially decrease the amount of potential wolverine habitat. Within about 70 years, an estimated 60% of their habitat will be lost in the lower 48 states.

In October 2020, after a decade of being a candidate for listing, the US Fish and Wildlife Service withdrew the proposal for listing the wolverine as threatened. They stated “The best available science show that the factors affecting wolverine populations are not as significant as believed in 2013…” Despite this decision, a coalition of conservation organizations have vowed to challenge the ruling. 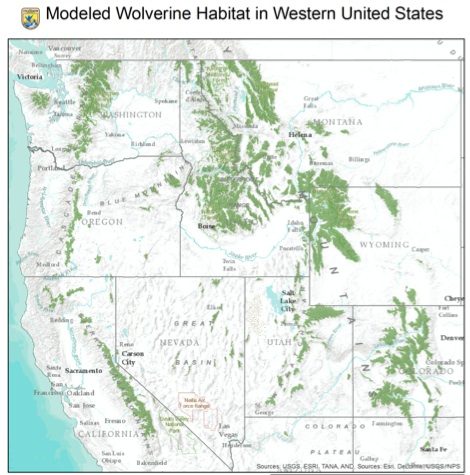 This U.S. Fish and Wildlife Service map shows, in green, the modeled areas of potential wolverine habitat in the Western United States.