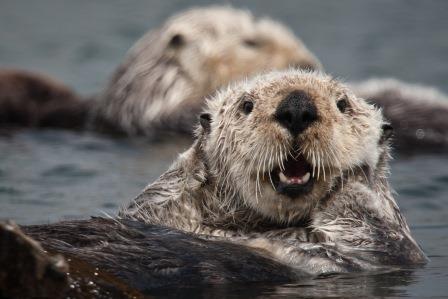 The sea otter is the largest member of the Mustelidae (weasel) family, and the smallest species of marine mammal in North America. Unlike other marine mammals, sea otters have no layer of blubber and thus rely on their dense fur for insulation from cold ocean waters. Their fur ranges from dark brown to reddish brown, and they have long lighter-colored whiskers. Their forepaws have claws, are padded and are used for grooming and feeding. Their hind feet are flipper like and used for swimming. Males are generally larger than females, and reach sexual maturity around five or six years of age, while females can be sexually mature by age four. Though twins have been documented, females normally give birth to a single pup once every one or two years. Otters forage for a variety of species of invertebrates, such as crabs, sea urchins, or mussels, and some fish. Foraging dives generally last 50 to 90 seconds and can reach at least 45 meters in depth. Sea otters are considered a keystone species and thus have a significant impact on their habitat—for instance, sea otters have been shown to help maintain and even help recover kelp forests by keeping sea urchin populations in check.

Sea otters were hunted to near extinction as a result of the international fur trade during the 18th and 19th centuries. Since the 1911 International Fur Seal Treaty banned the hunting of fur-bearing marine mammals, populations have subsequently increased and sea otters have recolonized much of the available habitat off the coast of Alaska and central California, and small, translocated colonies exist in British Columbia and Washington. However, much of their historical range remains uninhabited. The last known otter in Oregon was killed in 1907, and a reintroduction effort in the 1970s was unsuccessful. Between 2008 and 2014, there were 25 sightings of sea otters along the Oregon coast (most of which come down from Washington). Though these sightings are promising, it is unlikely that sea otters will return on their own. As such, efforts are underway to determine if reintroducing sea otters to the Oregon coast is feasible.