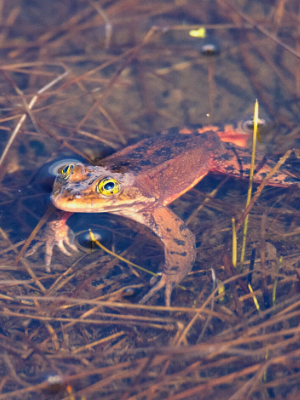 The Oregon spotted frog, named aptly, for its black spotted markings, is a medium sized frog with large upturned eyes and a reddish brown coloration that turns more red with age.

These frogs are very aquatic animals (even compared to other amphibians) and love the large and warm-water wetland environments, ponds, lakes and sloughs of the west and east cascade ecoregions. If you’re lucky enough to spot this rare critter amongst the aquatic foliage don’t be surprised if it barely moves at all! Oregon spotted frogs are sit-and-wait predators, meaning that they will relax on careful lookout before pouncing on unsuspecting prey that happens to move past, sticky tongue at the ready. Their diet consists mostly of insects like beetles, flies, water striders and spiders, although the frogs have been known to eat some aquatic vegetation and even the juvenile frogs of other species.

These frogs, like many amphibians, have a hands off parenting style and will not feed or guard their young. In early spring female frogs will gather and lay communal eggs, which in about four months time will metamorphosis into tadpoles and reach a breeding age in a few years.

Why do they need our help?

Sadly, this little frog has been lost from at least 78% of its historical range, although estimates show that 90% is more likely, as suitable habitat is encroached on by human activity, including cattle grazing, which tramples vegetation and reduces coverage along water bodies. Additionally, competition with invasive fish and bullfrogs poses a threat to the species. If RAWA passes, the funding from this bill could make all the difference for the species’ recovery!