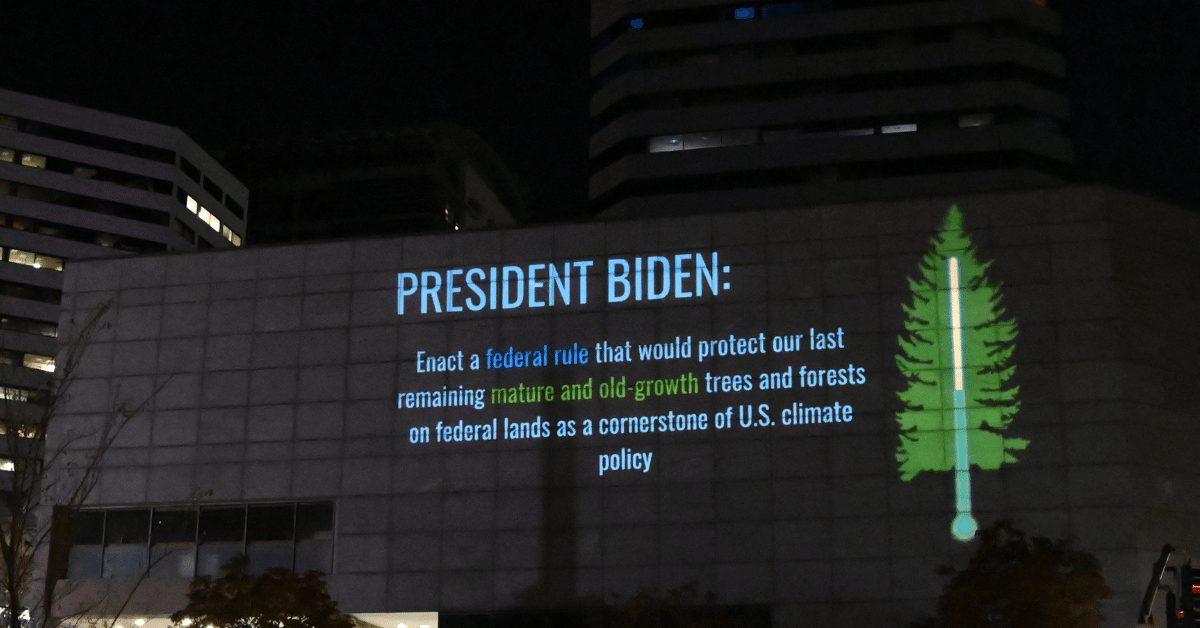 This weekend, salmon, owls, and messages to President Biden were projected across the World Trade Building in downtown Portland. Climate and forest activists used the imagery and tweets from all across the country to call attention to the importance of safeguarding the nation's public forests for combating climate change, protecting drinking water, and safeguarding fish and wildlife habitat. In rallies organized across the country this week, including in Portland on November 17th, activists will demand Biden take more concrete action to protect mature and old-growth forests from logging.

VIDEOS FOR MEDIA USE

Our mature and old growth forests need our help. Join us this Thursday in Portland to let @POTUS know we need action, not just words. #WorthMoreStanding #Cop27 #ClimateForests

Six months ago Biden issued an executive order directing an inventory of mature and old-growth federal forests and policies to protect them. Despite this order, the Forest Service and Bureau of Land Management (BLM) are proceeding with numerous logging sales targeting mature and old-growth forests, including projects in Oregon that have attracted national attention.

The Portland rally will begin at 11:30 AM at Terry Schrunk Plaza across from the Forest Service Region 6 offices where organizers plan to highlight several logging projects in Oregon, including the Flat Country logging sale on the Willamette National Forest.

"In the Pacific Northwest, mature and old-growth forests are our first line of defense against climate change," said Lauren Anderson, Climate Forest Program Manager at Oregon Wild. "Keeping these trees standing means they can continue to capture and store the pollution that causes climate change, provide future generations with clean water to drink, and protect vital habitat for fish and wildlife."

These nationwide rallies follow the release of a new report from the Climate Forests Coalition, America’s Vanishing Climate Forests, profiling 12 projects on federal public lands that will log thousands of acres of mature and old-growth stands, from Oregon to West Virginia, harming habitat for endangered species and releasing centuries of carbon being stored by the trees. Advocates had identified 10 similar projects in a previous report, and all projects combined put 370,000 acres on the chopping block.

Logging sales in Oregon highlighted in this report are the Ragged Ruby project in the Malheur National Forest and two BLM projects: Evans Creek and 42 Divide. A previous “Worth More Standing” report included the Flat Country logging sale, and the Poor Windy and IVM logging projects on Oregon BLM lands.