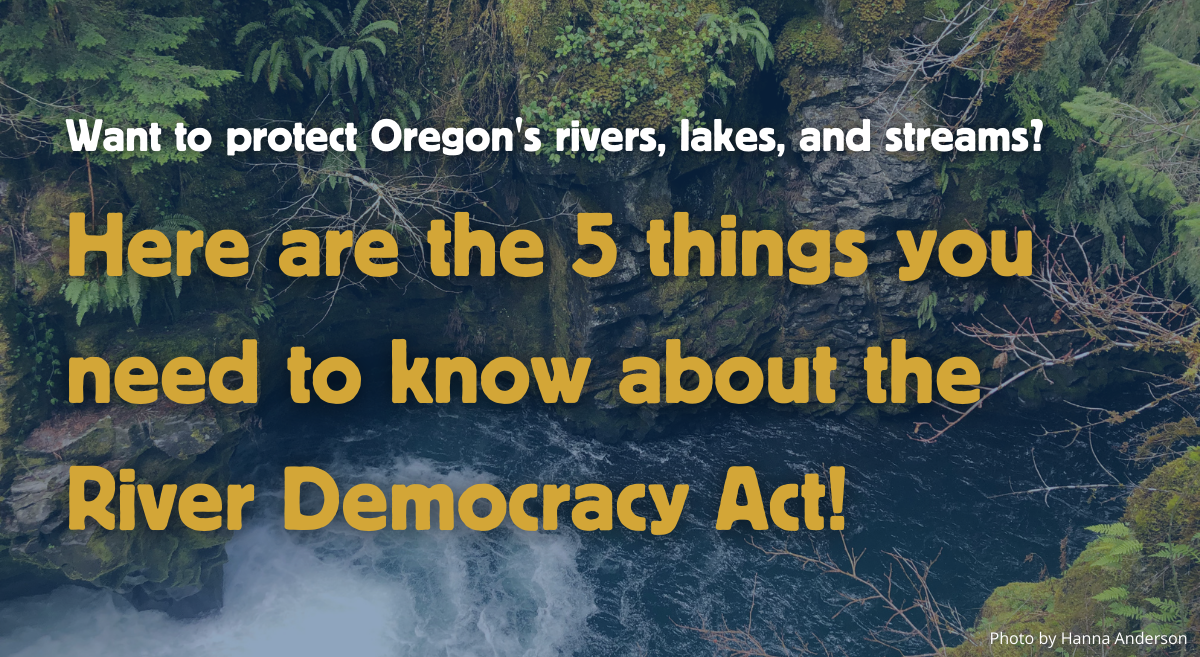 Let's work together to protect our favorite places by supporting the biggest river protection act in Oregon history!

As spring turns into summer and we all start to turn to the outdoors to spend these long warm days, it is important to remember that many of our beloved areas are still under threat. In this blog post, we will go over 5 key takeaways from the River Democracy Act, a bill currently making its way through Congress (that needs your support to make it over the finish line!)

This bill got its name because of Oregonians like you sending in thousands of nominations across the state and letting your voice and your priority for protecting our waters be heard.

In October of 2019, Senator Wyden began a 5-month public nomination process, soliciting input from Oregonians all across the state. This opportunity was published widely - papers all over Oregon, town halls on both sides of the Cascades, and shouted from the rooftops by a variety of environmental and recreation organizations. In Bend alone, we saw multiple events that were standing room only, including a “nomination party” and film screening at the Patagonia Bend store, and at a “Rivers Town Hall” hosted by Senator Wyden himself. In total over 15,000 nominations rolled in from Oregonians of all stripes, including anglers, outfitters, the whitewater community, and more. His office then took a year to digest all of those nominations and write the bill.

The Wild and Scenic Rivers Act, which was originally created in 1968, allows for the protection of many different types of special waterways - not just big, beautiful rivers with challenging rapids. The act also allows for the protection of lakes. Some of Oregon’s most iconic High Cascades lakes are included in this bill, like Waldo Lake and Hosmer Lake! These lakes provide excellent fish and wildlife habitat and attract visitors from around the country who want to swim, paddle, or fish in the shadow of Oregon’s volcanoes.

Smaller creeks and streams can also be included, which is important because they directly contribute to the health of the larger rivers in a watershed. In addition to providing clean and cold water sources to larger rivers, helping keep river temperatures lower throughout the summer. One of their most important roles is that of fish nurseries! Creeks and streams provide habitat with lower flows (slower moving water) and ample food where adult fish go to spawn and young fish learn the ropes. There are noteworthy streams all across Oregon that will receive protection from the River Democracy Act, including tributaries of some of our state's most beloved rivers like the Deschutes, Rogue, McKenzie, Willamette, and John Day.

Takeaway #4: Everyone's on board

Oregonians of all stripes are in support! Anglers, paddlers, hikers, hunters, and over 250 businesses have spoken up in support of the River Democracy Act! That includes breweries, outfitters, gear shops, and more.

In a letter they released last summer, they said:

From camping alongside the Deschutes to floating down the McKenzie to exploring the wonders of the Owyhee Canyonlands, the rivers and waterways of Oregon provide endless recreation opportunities for Oregonians and travelers from across the globe alike.

The River Democracy Act has taken some big steps through Congress, but it’s not done yet! It has hit several major milestones - introduction in Feb 2021, and a Subcommittee hearing in the Senate in the summer of 2021 - but is still awaiting its final big hearing in a Senate Committee. There has been substantial public support for this bill so far, but we need to keep the pressure on! Senator Wyden has said on multiple occasions that he hopes to pass this bill by the end of this Congress (January of 2023) - if we want that to happen, we need to make sure he continues to hear from Oregonians like you!

Ready to get involved?

Here are some ways you can help get the River Democracy Act over the finish line this summer:

1. Tweet at Senator Wyden (@RonWyden) to make sure he realizes Oregonians care about our rivers, lakes, and streams.

2. Show up and be heard. Attend town halls/public events and make sure the River Democracy Act is addressed. (Keep up with Senator Wyden's town halls here)

3. Learn the facts. We have a lot of amazing resources on our website about the RDA and specific regional information. Learn more here